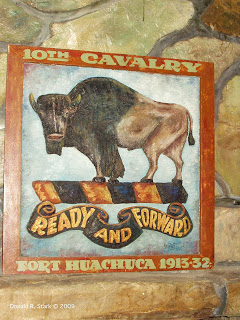 Ending a nearly a week of remembrance, I am reminded of the day my father spoke to our Rastafarian Neighbors. In general they were regarded as a nuisance in our neighborhood. So when they moved into the house next door my Father was not pleased. Mostly because the kids ran around everywhere, including our yard, and my Father worked at night. So he needed to sleep part of the day, not easy when your neighbors are continuously blasting the street with Reggae.

But one day, he heard them play Bob Marley's 'Buffalo Soldiers'. So Dad called over the fence to them and asked about the song. Then he introduced himself as a real Buffalo Soldier. 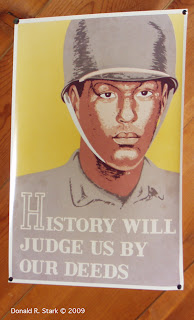 Now in case you didn't know, there were real U.S. Infantry and Cavalry Regiments of African-American soldiers, given their name originally by the Plains Indians, who thought their hair resemble that of the Buffalo (American Bison).

He spoke often of his time training for Desert warfare in Fort Huachuca, Arizona. Donald and I had a chance to visit a few years ago. The 10th Cavalry was one of the original regiments and the most famous Black Regiment from the American Indian Wars (~1866-1885), and served under General John J. 'Black Jack' Pershing's during the Spanish American War (1898).

Can you guess why he had that nickname?
Posted by MyVintageCameras at 10:30 AM