Debut of the ‘Brick’ 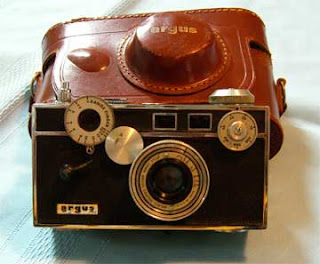 My mother recently gave me her father’s 1950’s vintage Argus Model C3, fondly called the ‘Brick’ due to its rectangular prismatic shape and durability. This camera traveled throughout the Eastern US and Caribbean recording his experiences, mostly visiting family. This is a fully manual camera (no light meter) but with lots of adjustable controls: Shutter Speed, f-Stop, and a handy ASA (ISO) reminder setting on the back. The shutter cannot release accidentally because the release spring has to be set (almost like cocking a gun). It also has a BULB setting.

Having found a treasure of old film that had fallen to the bottom of my freezer (this appears to be a common problem), I’ve loaded the camera with film and will be taking pictures around town. The focusing prism seems to be a bit trickier to manage than my more modern Mamiya and Canon rangefinders. By next week I should have some photos from the ‘Brick’ to share.
Posted by MyVintageCameras at 1:29 PM