Not because it was the first stop, but because it was the only stop where I shot only digital.  It was raining and I didn't feel inspired to get out my film equipment.  Also the place was over-run with tourists.  Not exactly a vibe that inspires me either.  But still some interesting images.

Welcome and Mind Your Manners! 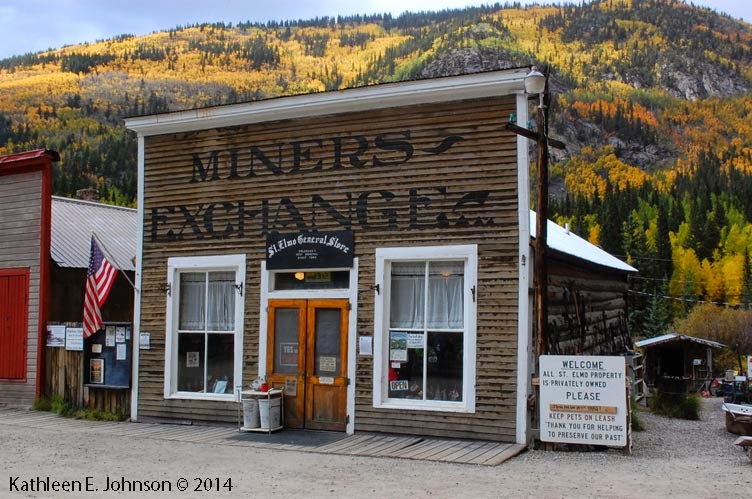 Add Colorado Fall colors, which were at their Peak during our travels: 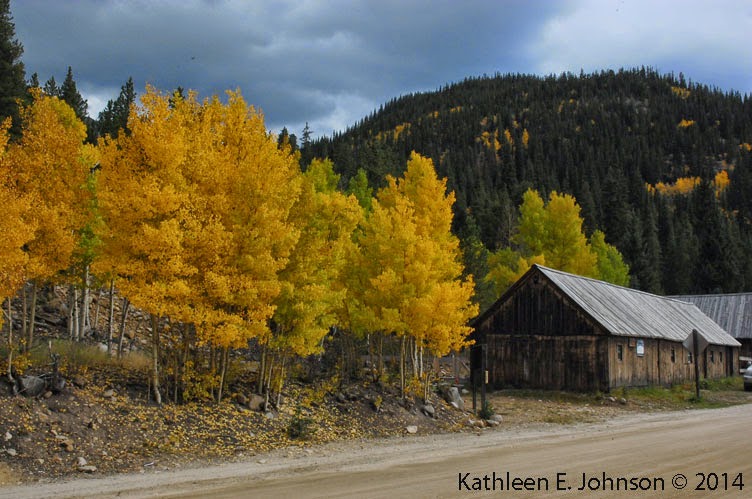 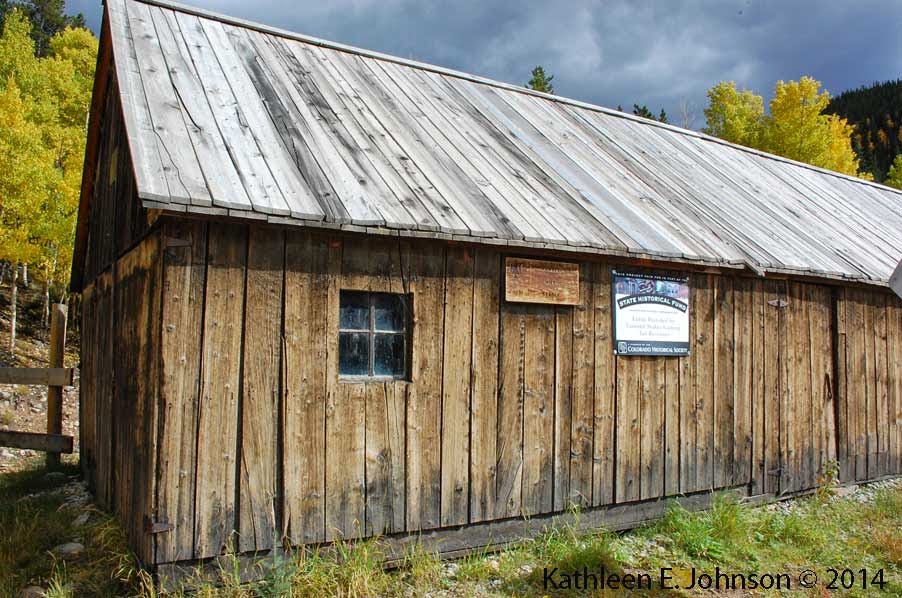 Posted by MyVintageCameras at 9:30 AM No comments: 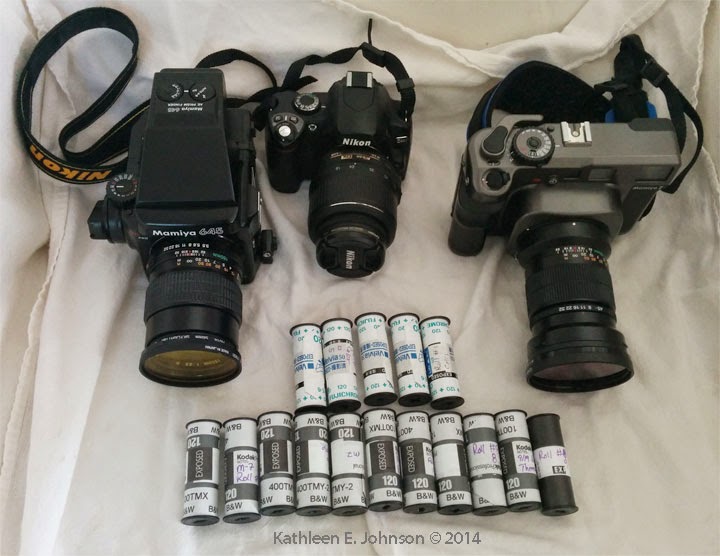 Featuring the Mamiya 645, Mamiya 7, and Nikon D-40 (recently inherited when my husband upgraded his camera).  Donald also used the Mamiya 6. We will posting photos both here and on Longs Peak Journal.


And the Company was Great! 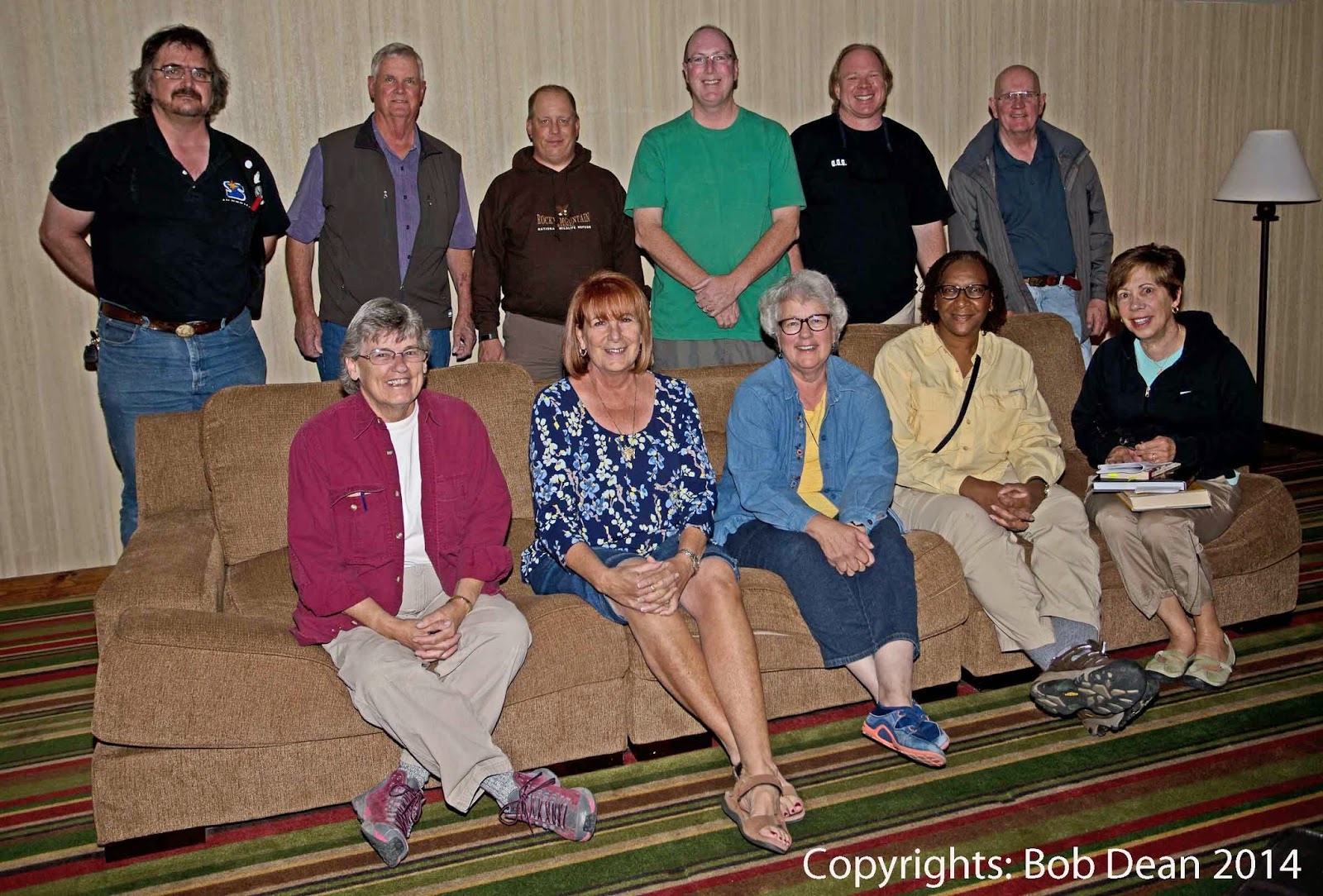 
I'll begin this week with some posts from the D-40 while we wait for our Film to be Processed.  Expect the first Film Images by the Weekend.
Posted by MyVintageCameras at 10:30 AM No comments: 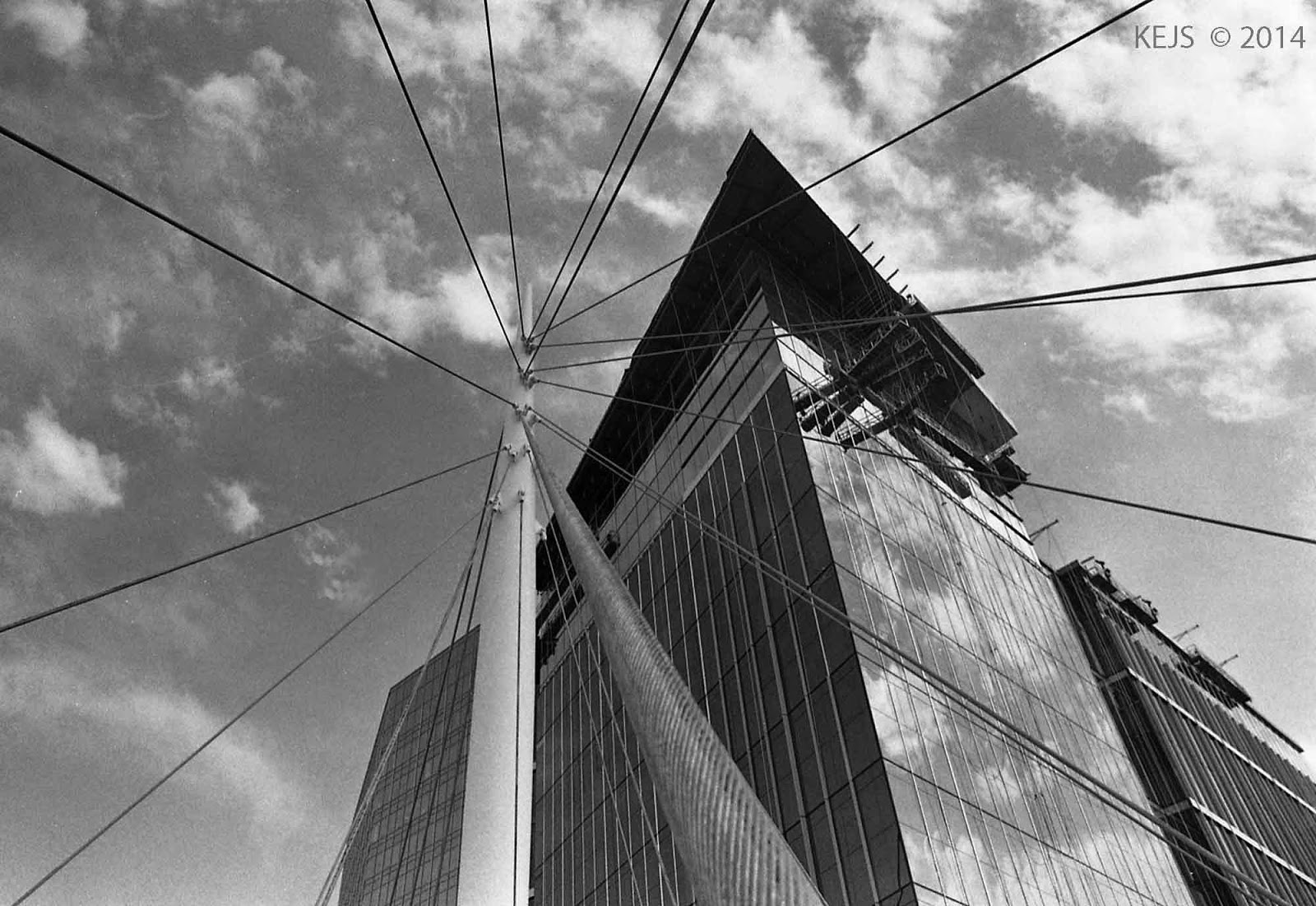 NYC Tallest Building, One World Trade Center, is beginning to inspire Art and Photography.
Posted by MyVintageCameras at 9:30 AM No comments:

More Perspectives: Getting Closer to the Subject

With a dull grey sky this view of the Ore Chute might be better served......... 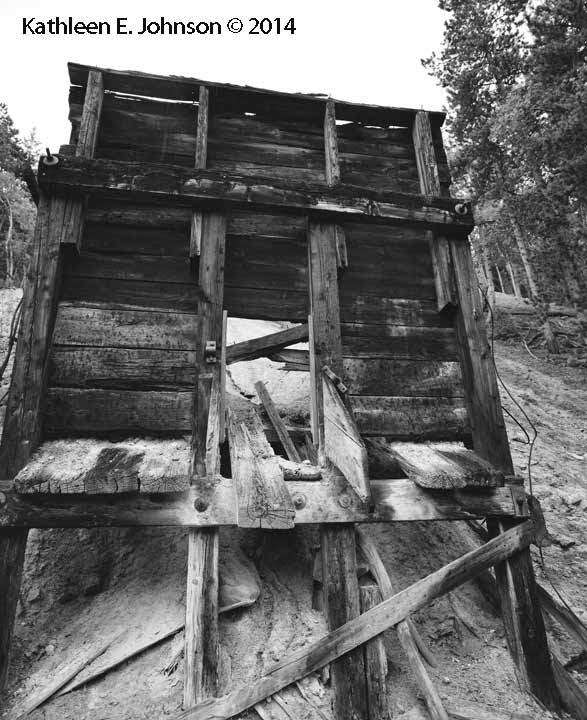 By moving in a little closer, and taking the opportunity to look through the door. 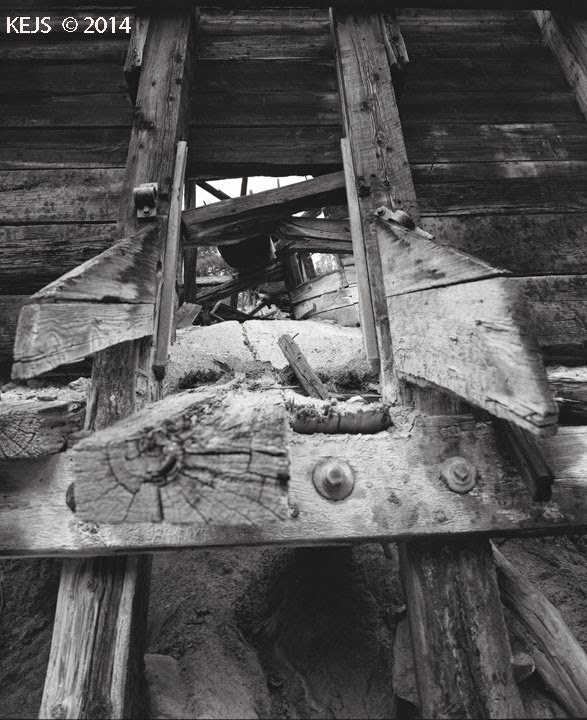 Posted by MyVintageCameras at 11:49 AM No comments:

Why the Trains Were Here

The train grade of course was built to transport the silver ore.  In some cases preprocessed at the Santiago Mill.  But other mines were downhill from the Mill (and you don't take ore up hill to be processed).  So these mines loaded the ore directly on the train using these chutes: 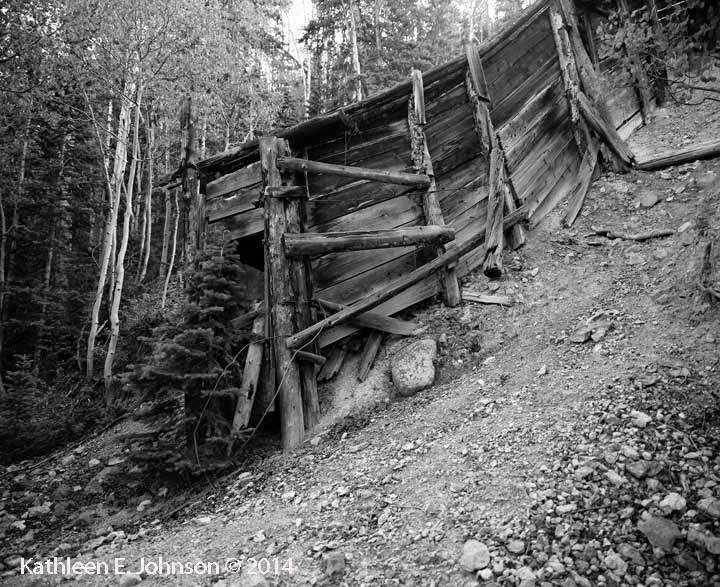 We are currently touring the the Cripple Creek Mining District.  More on that soon.
Posted by MyVintageCameras at 11:43 AM No comments:

We make at least one trip per year up to Waldorf and the Argentine Pass.  On our most recent visit we learned that the Stamp Mill was being restored and maintained by the Santiago Mill Stewards, part of the Georgetown Historical Society.  Also the Mill is now on the National Historical Registry. 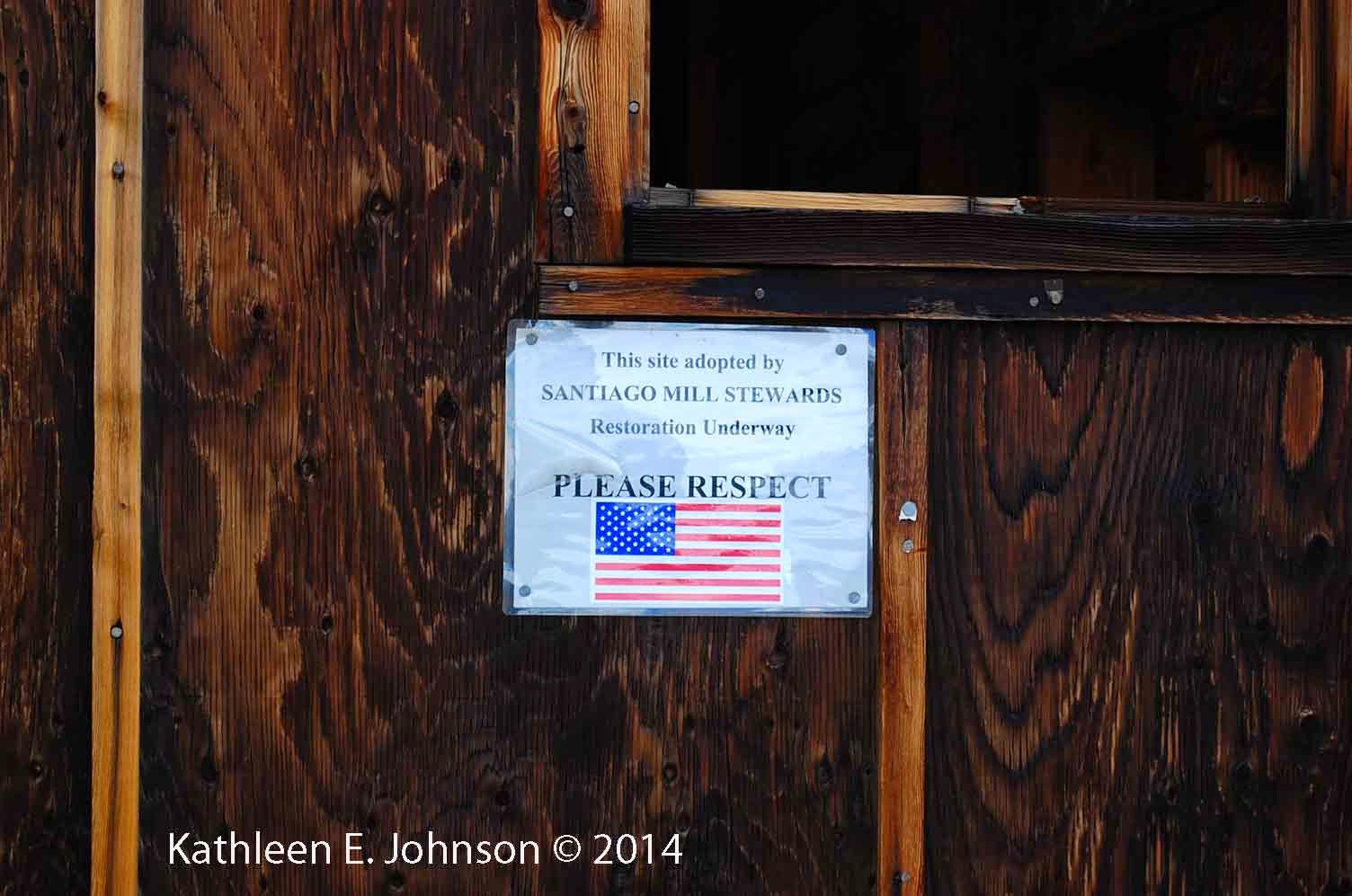 Too bad people feel the need to shoot up everything, including their history and heritage: 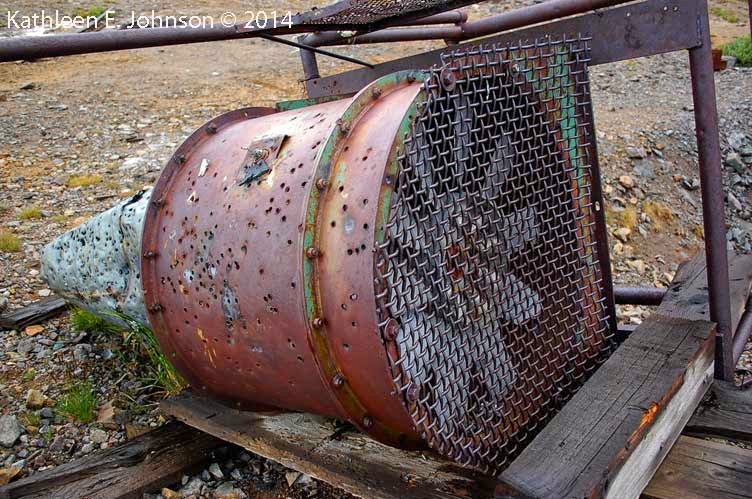 Ventilation Fan from the Santiago Mine-All Shot Up!
Above Waldorf Town Site. 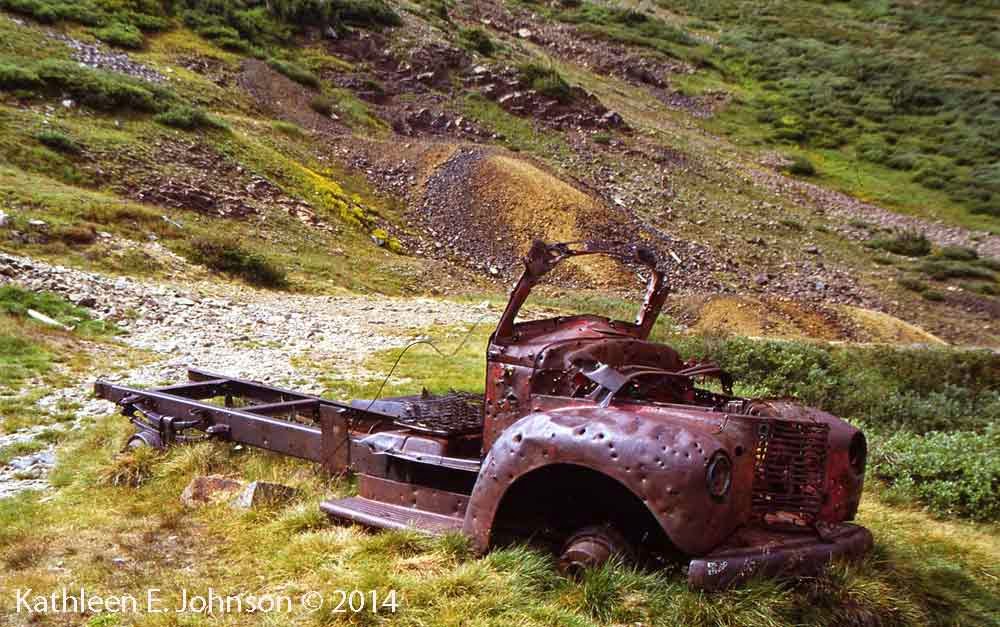 Truck Frame at Geneva Creek Mine Site-All Shot Up!
Along Guanella Pass Road (This is the Film Image)
Posted by MyVintageCameras at 11:53 AM No comments:

More from the Argentine Grade: Perspectives 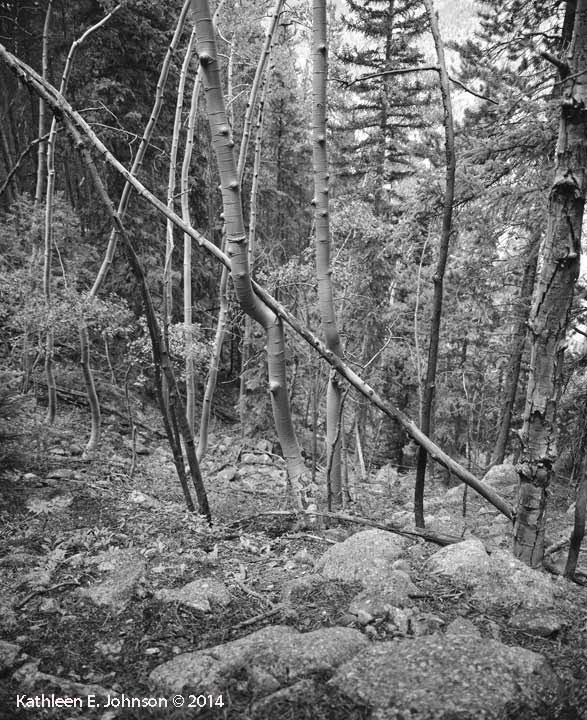 At first I thought I liked the Portrait View (above).
But Now I thing I prefer the Landscape View (below). 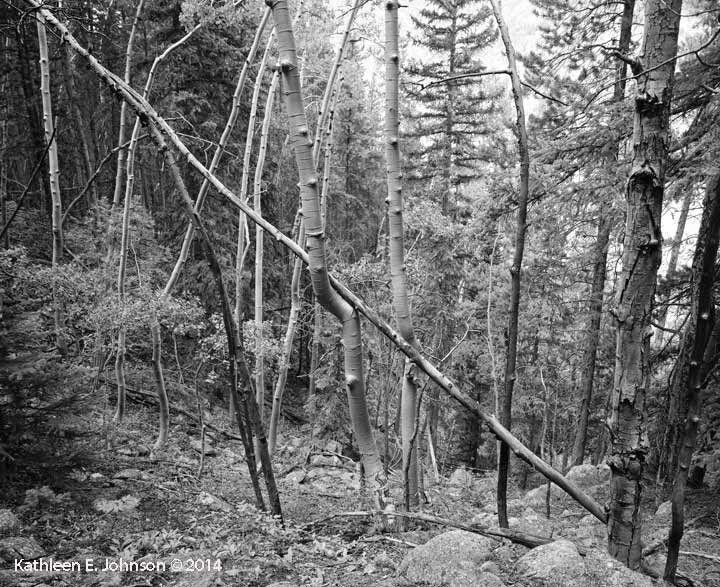 Posted by MyVintageCameras at 11:36 AM No comments:

Along the Trail: Part II 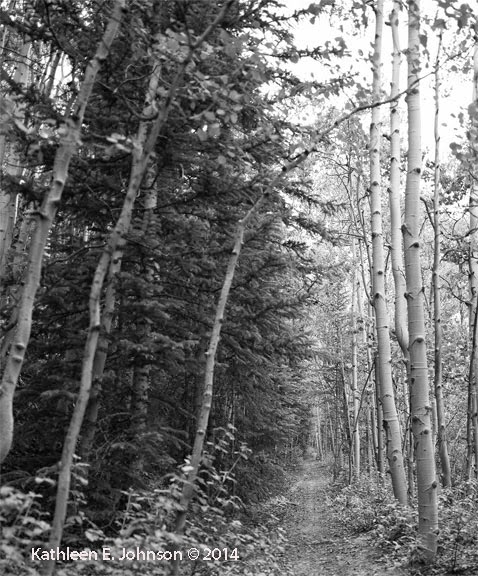 In case you hadn't figured it out, this was a Narrow Gauge Railroad!
Posted by MyVintageCameras at 11:49 AM No comments:

Along the Trail: Argentine Grade

We have visited the Argentine Mining District on many occasions 4X4 off roading.  But there is also a hiking trail that follows the lower part of the Railroad Grade: 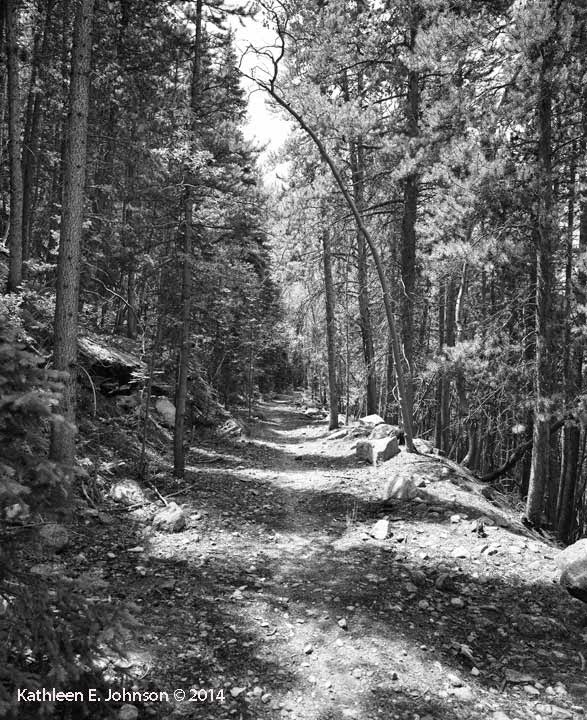 We'll spend some time this week exploring Mines and Ghost Towns......Our Fall Theme.
Posted by MyVintageCameras at 11:28 AM No comments:

Saturday's Online: More from Clyde Butcher on Lenses and Sharpness

Facebook being what is is, I can't post the link to Clyde's comments, so I've copied the quote here:

"Sunday I took off to Myakka to test out a few lenses. The weather wasn't really any good for photography, but I wanted to test them before my trip to Bozeman MT where I have an exhibit in the Rocky Mountain Museum.

Using my Sony a7R digital body, I took the same photo at Myakka using the Cambo Artus with the RZ Mamiya 75 shift lens, then with the Cannon 17mm, then the Voigtlander 15mm, and then with the Zeiss 15mm lens. My conclusion has be introduced by saying that my eyes aren't what they use to be, and that none of this was done scientifically. Anyway, when I put the images up on the computer screen the two best lenses appeared to be the Cannon 17mm and Zeiss 15mm. Hard to tell the difference. Then the Voigtlander, which was so close to the other two that it wasn't worth saying it was to much different. As for the Mamiya, it too was very sharp, but in a much different way. It looked like…well, a photograph I had taken with film. It was sharp enough for me to enlarge it to a ten foot print on my computer screen and still look sharp, but it didn't have that HD quality to it that digital lenses have…it isn't a digital lens so it behaves differently. It's hard to explain.

Now that I know what each lens will do, I'm ready for some "real" photography!"

Clyde's been experimenting with digital photography, because he felt he couldn't carry around his large format cameras all the time.  But an interesting discussion of experimenting with lenses from film cameras to eliminate that "Digital Look", something that I also find unattractive.  I think you know what I mean, that "unnatural sharpness" of things your eyes can't actually see.

Remembering that people are not best served by HD television, why should all of your photography have that HD look too? 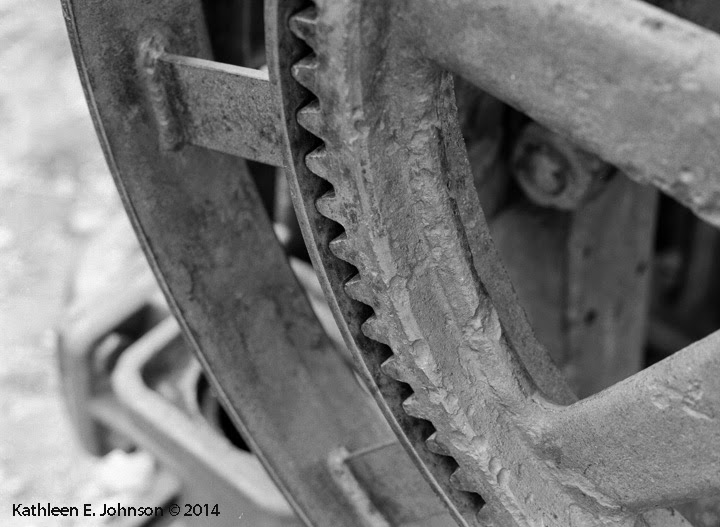 Our Last Look (for now) at that Mamiya 80mm Sekor Macro
Posted by MyVintageCameras at 6:30 AM No comments: 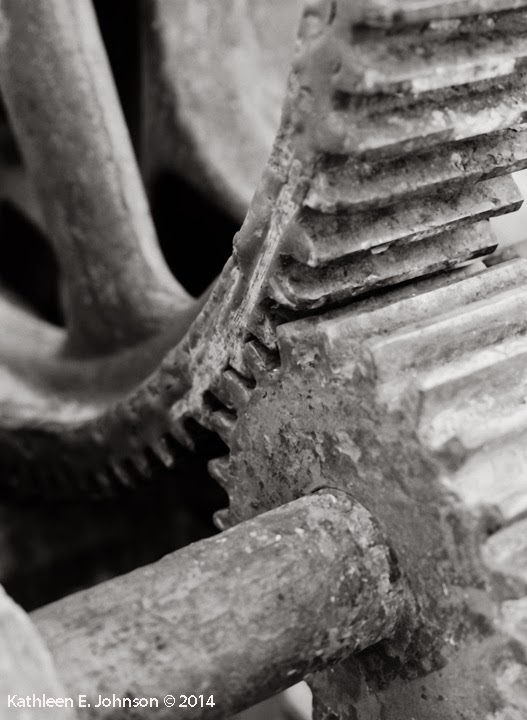 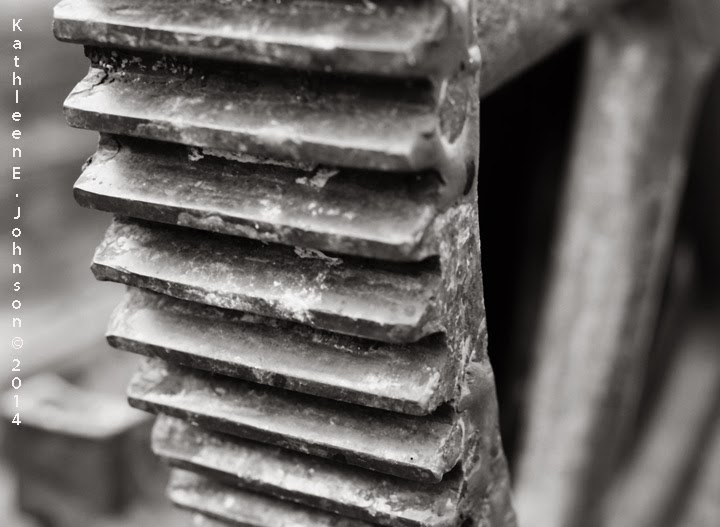 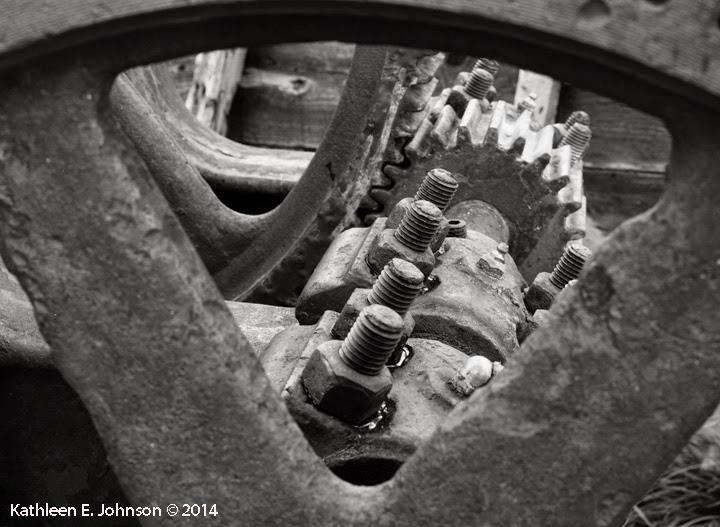 Cropped a bit to remove some distracting grasses: 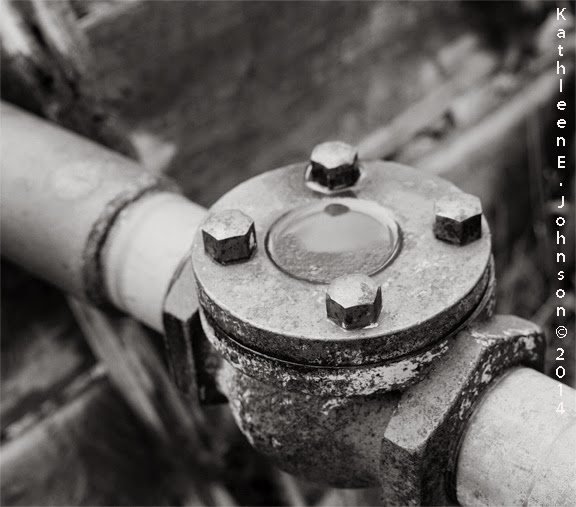 
Originally posted in February 2011 (although the photo was made the summer of 2010; this area is inaccessible in winter), Old Pump from the Waldorf Mining Area: One comment was, to take a closer look at the gears and mechanism.  So it only took until last week (August 2014), for me to do that!  We literally "Gear UP" for Labor Day!  and Pay Tribute to Denver's hidden industrial past: 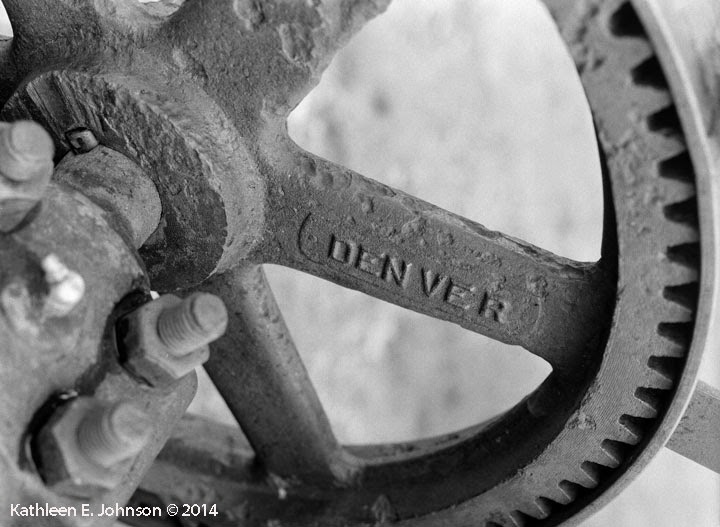 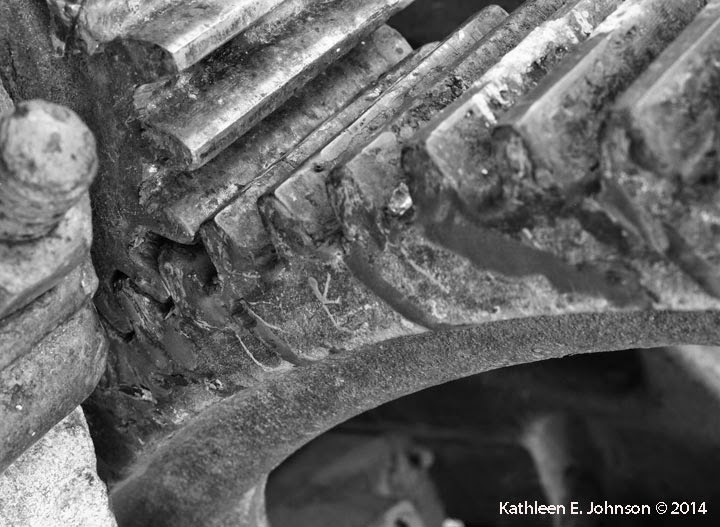