The Tram Station.  Compare to color. 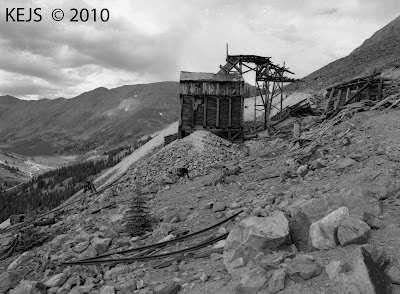 I think Ghost Towns and Mines lend themselves to Black and White.
Posted by MyVintageCameras at 1:00 PM 2 comments:

Sunset on the Thanksgiving Holiday Weekend, with a hello to Advent: 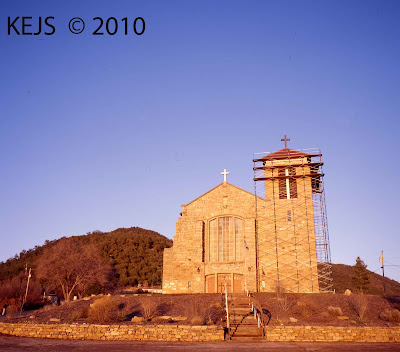 St Joseph's Franciscan Mission on the Mescalero Apache Reservation, New Mexico.
It was closed when we arrived, but next year hopefully photos from inside.....
And yes, the sun is actually setting behind us!
Posted by MyVintageCameras at 2:11 PM 1 comment: 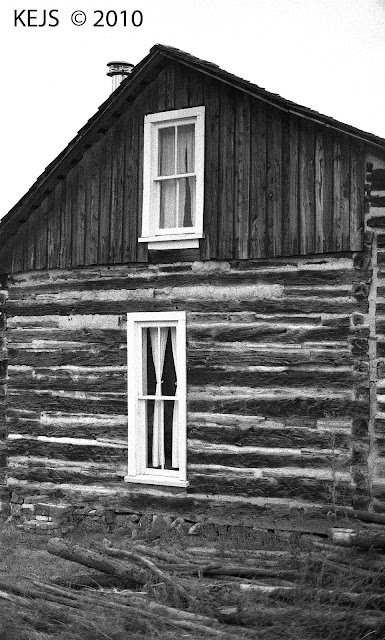 Quiet Holiday Weekend for us.  We don't participate in the wrecklees spending spree taht kicks of the Christmas buying season........ 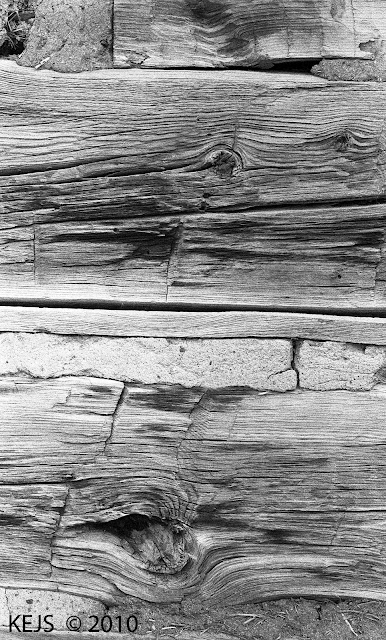 Instead let's revisit a cabin at the Golden, Colorado Historic Park.
Posted by MyVintageCameras at 3:03 PM 2 comments:

Earlier in the summer we had traversed the east side of Rollins Pass.  On that trip I only shot B&W. 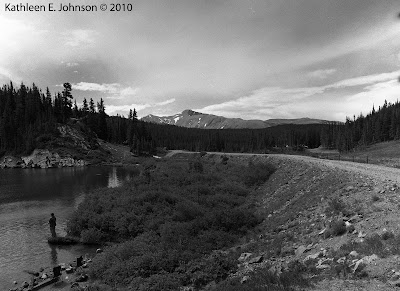 Named Yankee Doodle Lake because the railroad reached this point on the 4th of July. 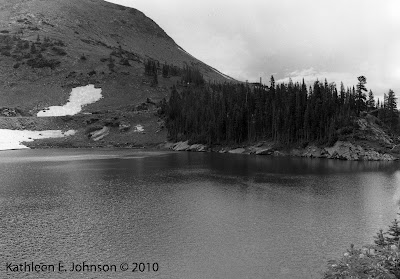 The pile of rock in the background is the result of a failed attempt to build a tunnel through to the west.  Hampered more by a lack of money than engineering.
Posted by MyVintageCameras at 12:47 PM No comments:

The Pine beetle infestation is actually past its peak now.  But that means we have lots of Lodge Pole Pines to cut down for fire prevention. 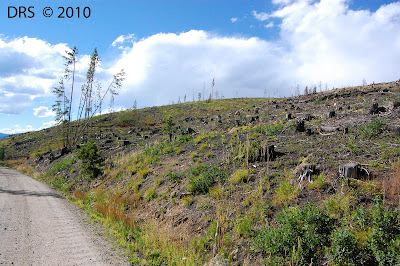 Rollins Pass is above Winter Park, which was devastated by the Beetle.  On our late summer trip there we saw many areas clear cut of the dead forest 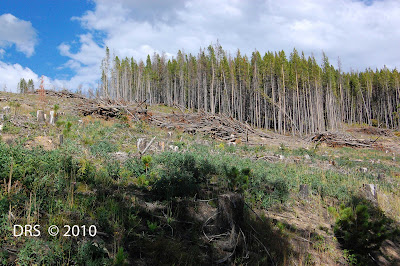 Posted by MyVintageCameras at 12:33 PM No comments:

Top of the Pass

Looking from the trestle towards the top of the Pass.  It was too dark by the time we got there to photograph much.  But that leaves us with a return trip next summer, since the pass is snowed in now until at least early June 2011........ 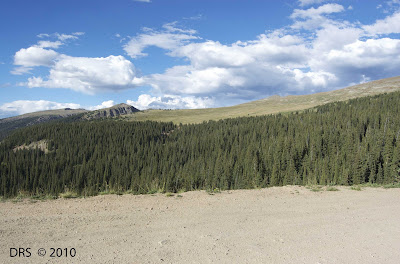 Posted by MyVintageCameras at 12:29 PM No comments:

Back to West Rollins Pass

Picking up where we left off, more perspectives on the Rifle Sight Trestle, Rollins Pass west: 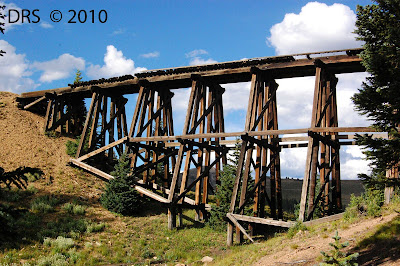 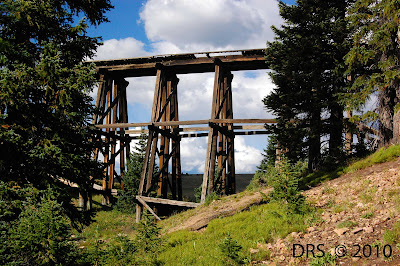 Posted by MyVintageCameras at 12:29 PM No comments:

Honoring all of our Veterans, Past and Present: 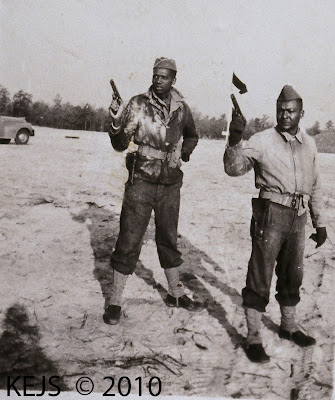 Dad (left) on the Firing Range, training for WWII.
Posted by MyVintageCameras at 8:30 AM No comments:

The Reason for B&W 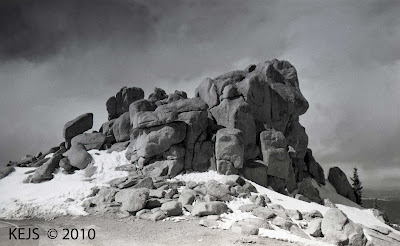 Rock formation near the summit of Pikes Peak.
Posted by MyVintageCameras at 9:04 PM 1 comment:

Back in the Saddle Again: At Rollins Pass

Rollins Pass was the original trail across the Indian Peaks to Middle Park. At 11,660 (3554m) it was never an easy journey.  Wagons began crossing the Pass in 1862, and in the 1870's John Rollins constructed a toll road, The Old Boulder Wagon Road.   This was superceeded by a temporary railroad line begun in 1902 and completed in 1904.  Conditions for work crews were so bad that they were paid the outrageous wage of $3.43 per day to work through the winter. 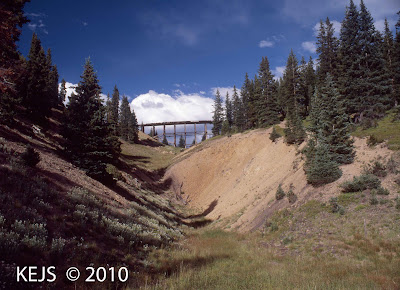 This is a view of the Riflesight Notch.  The collapsed area in the middle of the image was the location of a tunnel. East bound trains came through the tunnel, circled around the mountain, and crossed the railroad trestle heading towards the top of the Pass. 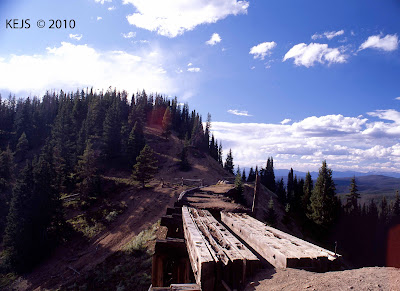 This was the highest railroad traversed pass in America until it closed in 1928 with the completion of the 6.2 mile long Moffat Tunnel.

Swiss designed Mallet locomotives were the only type that could traverse the sometimes > 4% grades.  Four to five locomotives might be used to cross the pass.  In winter each train was preceded by a rotary snow plow.  But sometimes they were still trapped at the top in in snow tens of feet deep. See modern rotary snow-plow videos.

This was my semi-final roll of E100GX.  I still have one more roll left and three more photos to shoot.  Then I will put E6 film to rest  and probably never shoot it again.

My husband has been trouble shooting my blogging computer with some mixed findings. Some of my memory had gone bad and was causing random performance problems. Hoping to have things up and running again by the end of the week.

I know, EJ will say not to fix things until they are completely non-functioning. That advice was apparently not taken here, eventhough I had relayed it.
Posted by MyVintageCameras at 1:13 PM 1 comment: